A lot of people consider jobs for introverts to be ironic, but it’s more of a stigma than most people realize.

At the Academy of Interactive Entertainment, an overwhelming majority of our students and those interested in studying on our campus, consider themselves to be introverts. Our staff and instructors understand and recognize that both the video game and animation industries are dominated by introverts. Introverts are often programmers, just as much as they can be artists. Social anxiety and introversion are not one in the same, just as people who lean toward extroversion doesn’t mean you’re constantly disrupting people working.

What do you visualize when you think of an introvert at work? Some people picture a lone employee sitting at a desk for 8 hours a day, not saying much to those around them. To others, being introverted in the workplace means you stick to yourself and don’t indulge in the office politics. In a world of extroverts and ambiverts, where does the introvert work? More specifically, what kind of jobs are out there for introverts that want to explore a creative field?

Since we’re an interactive entertainment-focused college, we’ll go over some of the introvert-friendly roles in the industry: 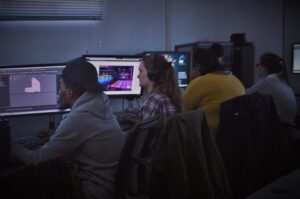 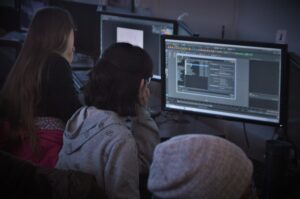 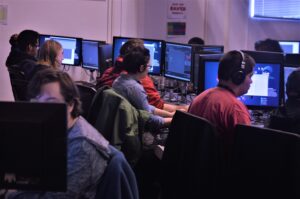 Game Programmers are masters of creative problem-solving, using languages such as C# or C++ to create a game’s functionality. This typically involves a level of task management that is generally worked in smaller groups, but it doesn’t partake in much social activity for their role.

For game programmers that work in a more AAA studio work environment are usually not required to pitch any game mechanics in front of any business executives, because they are the ones implementing these design functions in the game.

Animation and VFX is all about giving life to artistic creations (called assets), often made by a team of artists from various backgrounds, specializing in aspects of art.

Like programmers, you can expect a minimal amount of social interactivity, as these positions listed are more focused roles. From rigging to animation, these range from: storyboard artists, 3D modelers, character artists, cinematic directors, lighting artists, narrative animators, creative directors, and the list goes on. Industry artists typically specialize in a certain aspect of art, while emphasizing an exceptional portfolio.

Game design is seldom done by an individual, but a team of designers. Designers establish the features of a game, and maintaining the game design document, typically along with producers and other designers. Ideas may come through solitary means, but this document is largely established through team brainstorm sessions.

This document is like the blueprints for a video game, containing features, story, art direction, and gameplay mechanics. Like producers, designers may also come from a programming or art background. Aspiring designers may benefit from taking some coursework before leading up to this job in their career path.

Do you like things to be organized? Producers are often in switch-hitting positions, but project management is generally seen as a valuable skill by all studios in the industry. Typically, producers are given the objective to boost the efficiency of a team.

A good producer is appreciated for their ingenuity and finding creative ways to keep a team from falling apart, and to stay on schedule. While this may be the most socially-demanding job among the ones listed, this is dependent on the needs of the studio. It is common for producers to have a background in other areas, which enables them to communicate more effectively with each team.

Many people in both the animation and video game industries have led very successful and life enriching careers. While introversion may be a trait found in many artists, programmers, producers and designers, being able to work on a team is essential. To make a video game or animated film of outstanding quality, collaboration and healthy communication between teams must established, no matter how small or large. Whether introverted or extroverted, all roles on a team work diligently together with the higher goal in mind: to create a video game or animated film by the deadline.